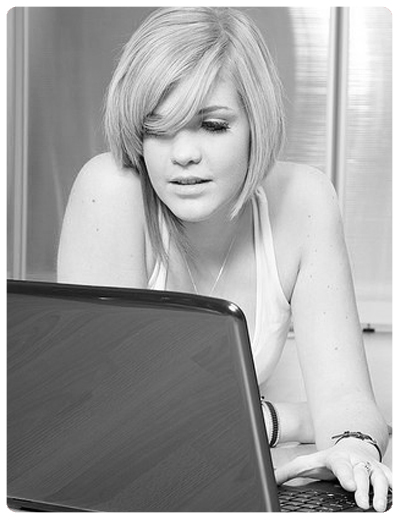 Internet addiction. As parents we worry about our children – we limit their screen time, we learn to navigate online ourselves (Facebook for Parents, anyone?) so that we can keep an eye on what they do there.

But in a thoughtful essay on Parenting.com, writer Rachel Mosteller explores what she posits is an increase in the number of parents who are internet addicts. In particular they are young mothers, feeling isolated and overwhelmed with a new baby, turning to the computer for community, companionship and escape.

She was startled to realize that she was one of them. “I was scrolling through family photos on my computer,” she writes of her moment of truth, “admiring my two beautiful babies, when I spotted a disturbing trend: My laptop was open in almost all of the pictures. There’s my daughter, at 8 months, playing at my feet while I typed away on the couch. There’s me and my son, a year later, with the laptop at my side as I held him in my arms.”

Mosteller talks with Coleen Moore, coordinator of resource development at the Illinois Institute for Addiction Recovery in Peoria, who says she is seeing increasing numbers of women, most with young children, come for help because they are addicted to blogs, message boards and Second Life.

At its worst, this addiction leads them to turn to pills to stay awake — and online — just a few hours longer, without sleeping or eating or showering.

Far more typically, it means looking up from the screen and realizing more time has passed than you’d planned, and that you prefer to spend that time with people you don’t actually know in places that don’t actually exist, rather than take on the tasks, problems and obligations of real life.

Like most addiction, the problem is not actually the internet — it’s the real life. The internet feels “productive” — go grocery shopping! Answer emails! Post photos! — while new parenting can feel like an endless round of laundry. The internet feels interactive, while being at home with a newborn can feel isolating.

As one mother in Mosteller’s article (a pregnant mother of three from Idaho, given the pseudonym Jessica Rigby) described it:

“I called it my ‘avoidance cycle.’ Whenever I felt overwhelmed, I would escape into mindless Web surfing. I’d find myself circling through the comments section on my blogs to my photos on Flickr to see if anyone had commented on them, and then over to Twitter to see if anyone was chatting with me there. I’d waste hours just waiting for someone to respond to something I’d said or posted.” Because she’d skip errands and allow her kids to make a mess of the house, she says, her stress only amplified, and she’d dive into the avoidance cycle all over again. If you think you are spending too much time in front of a screen, Mosteller has some advice:

Think you might be hooked? Try keeping a journal of how often you go online for a week. Then assess what you’re missing out on when you do it — sleep, family time, work?

Also note in your journal what was going on each time you decided to sit down at the computer. Was it right after a fight with your husband? Were you bored? By figuring out the triggers that send you seeking refuge online, Moore says, you can come up with alternative activities that help you deal. If you’re stressed, for example, you might take your baby out for a walk.

Moore also suggests making small weekly goals that get you involved with the real world: Join a playgroup or grab coffee with a friend. And if you can’t control your habit on your own, talk to a therapist who deals with addiction. Mosteller herself has stopped writing a blog, after six years. Rigby has stopped hers too — all four of them.

“Getting off-line has helped stop the flood of mama guilt I had all the time,” Mosteller quotes Rigby as saying. “I still have guilt over different stuff, but at least now I don’t have to lie in bed and think about all of the times my kids wanted something and I shooed them away because I was absorbed in my Google Reader.”

Does the internet help you get through your day as a parent? Or is it beginning to get in your way?